This is somewhat of a bridging stage between two traditional hiking areas around Ratzeburg and Mölln on the one hand an the Sachsenwald on the other. The trail is mainly on field footpaths across an appealing, slighly hilly landscape. By and large, the middle part of the stage follows paved paths. As some of the route markings at footpath crossing are missing, or have been covered by the undergrowth, it is good to have a map with you, or follow your GPS route.

From Güster the path first follows through some woods until Roseburg, continuing through an avenue of trees before reaching Gut Wotersen, the stately home with its central, gold-yellow facade. The path mainly follows agricultural roads across this cultivated landscape shaped by local farms. Occasionally the trail crosses smaller woodland areas. The E1 then crosses the A24 autobahn, passes through Talkau and on westwards to the small town of Fuhlenhagen with its remarkable half-timbered church of St. George, one of the oldest of its type in northern Germany.

There is also a pretty church in the next village along the trail in Basthorst. This church is, however, much younger, dating back to the 19th century. From Kuddewörde, the path follows a road for a short while until it reaches Grander Mühle (hotel and restaurant). Just after this, the stage profile changes significantly – along gentle footpaths, the E1 follows the River Bille, which will be a major feature of the next stage. Over a small bridge and we end the stage near the small town of Witzhave. 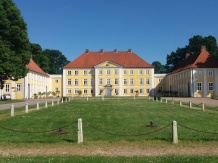 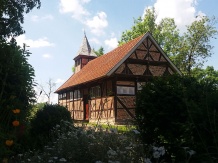