The E1 starts in Detmold for a varied stage with many sights along the way.

As unpleasant as the way from the north into Detmold was, the more beautiful is the way out of the city. The E1 leaves Detmold through a park-like green strip along the Friedrichstaler Kanal and later the Knochenbach. At the Oberen Mühle (with café) the Knochenbach is crossed over a bridge at the Mühlenteich pond and the route continues along a cycle path out of town. After having crossed a country road, the route follows an avenue slowly but steadily uphill to the Grotenburg.

At the entrance to the forest, the path continues straight up, finally no longer paved or asphalted, and slowly becomes a narrow path as the climb progresses. Now and then benches invite you to take a rest, especially when the Hermannsweg has merged with the E1.

Past the "small Hünenring" we finally reach the WALK competence centre and directly behind it the Hermannsdenkmal (Hermann monument), a popular destination for excursions which can also be climbed. The E1 finally circles the monument together with the Hermannsweg and, after passing the Waldbühne, meets the access road to the Grotenburg.

In a bend at the first houses of the village Heiligenkirchen the path leaves the road and leads through a forest. While the terrain drops steeply to the left, the Cheruskerweg (X3) soon leaves the path on the right, so that the E1 now follows the Hermannsweg (H) alone.

With the descent to Café Hangstein, the upper part of the village of Berlebeck is reached. Further downhill you finally reach the bird and animal park Adlerwarte Berlebeck. The path continues to descend to the small river Berlebecke (which you have already followed before in Detmold as Knochenbach) and follows the main road for a short stretch. The road is crossed and and it goes uphill past a church into the forest. Once the further ascent is done, the trail continues constantly at the same altitude. From time to time there is also a nice view of the surroundings. The forest is replaced by a more open heath landscape, through which it goes down to Holzhausen.

At the Waldhotel Bärenstein the E1 leaves the village and climbs up to the ridge of the Bärenstein (318m). After a few hundred metres, however, we descend again and reach the Externsteine, which can be climbed (for a fee). The path leads through the impressive rocks and shortly afterwards turns left up into the forest. But if you want, you can follow the main path for about 150 meters at the turnoff and make a detour to a big signpost that points to the E1 and the long-distance cycle path R1 (but you have to go back to the turnoff).

Via Knickenhagen the E1 reaches a parking lot, crosses under a federal road, crosses a country road and finally leads into a forest again. After an ascent and descent, the path reaches the Silbermühle (accommodation and a nice café terrace) and leads into the romantic gorge of the Silberbach Valley. At its end near the Kattenmühle, various hiking trails divide at a confusing place, so that you have to pay special attention to the correct marking. The further ascent to the Lippische Velmerstot (441m) initially runs along more unspectacular forest paths, past the "In der Schnat" nature friends' house. However, there are first views of the neighbouring Teutoburg Forest. The last, steep section has path character again. At the top we are welcomed by a beautiful heath landscape and can enjoy the view from a few sandstone rocks. In midsummer the whole mountain smells of blueberries, which grow everywhere here.

A very beautiful and partly panoramic section of the trail follows, among other things via the Prussian Velmerstot (464m) with an observation tower. Up to the Hakehütte the trail follows a narrow, densely overgrown path, which mostly runs parallel to the unused asphalt road. From the Hakehütte, the Eggeweg usually leads again along wider farm tracks. Here, the ridge path offers increasingly great views, mostly in an easterly direction. At the Rehberg hut, 100 metres above a railway tunnel, the path reaches a country road, on which you can finally descend to Altenbeken. For this you can follow the markings XW or X8 (Attention: the right way leads along the road and not left down into the forest). If you want to go directly to the next stage, simply cross the country road in a straight line.

The E1 follows the Cheruskerweg (X3) to the Hermannsdenkmal, then the Hermansweg (H) to the B1. Follow the Hermannsweg and Eggeweg (X1) until you reach the junction shortly after the Lippe Velmerstot. Continue along the Eggeweg.

The LWL open-air museum is located in the immediate vicinity of the E1 and displays more than 100 historical buildings on an area of 90 hectares. The buildings have been dismantled at their original location and rebuilt as faithfully as possible in the open-air museum. In addition, historical cultural landscapes, plant and animal species are shown and maintained.

There is a lot to see and the area is extensive. Ideal for a rest day or a day trip. 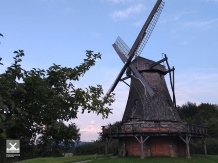 The Hermann monument stands on the Teutberg (386m) near Detmold and represents the Cheruscan prince Arminius. Arminius was the leader of the Germanic tribes in the Battle of Varus in 9 AD, and as such, he inflicted a decisive defeat on the Roman legions. The statue, inaugurated in 1875, is a popular destination for excursions. 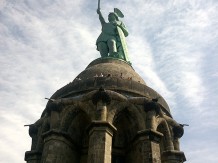 Among the highlights of this stage are the striking sandstone cliffs of the Externsteine. This rock formation, which suddenly juts out of the landscape, is located directly at a small lake, the Wiembecke Pond. The park-like grounds invite you to rest. It is a very popular excursion destination, especially at weekends and during holidays. 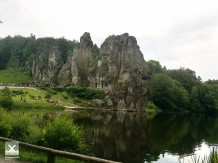 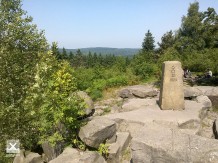