In Hameln, the E1 crosses the Weser and climbs steeply, ascending almost 200m to the top of Klüt. From there we follow the markings of the Hansaweg - the Hansa Way (X9) and after about 20 kilometres we cross the border from the state of Lower Saxony to North Rhine-Westphalia. The path takes us over Hohe Asch (371m), where an observation tower offers panoramic views of the surrounding countryside. Shortly before Linderhofe, we reach Dörenberg, which at 393m is even higher, but sadly the forested summit offers no view at all.

The Klütturm is a 23m high tower on the mountain Klüt (258m above sea level), which is reached from Hameln after a rather steep ascent. However, the view of the town compensates for all efforts.

For those who want to take a breather, the restaurant/hotel Klütturm with its panoramic terrace directly at the tower is available. Only a few hundred metres further on, the romantic beer garden of the Forsthaus Finkenborn invites you to linger. 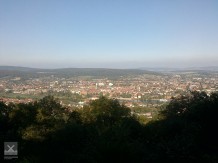 Only about 2km after crossing the border to North Rhine-Westphalia, the E1 reaches the mountain "Hohe Asch" (371.5m) with an observation tower. From there you have a view of landscapes that will be reached in the further course of the E1, such as the Teutoburg Forest with the Hermann Monument and the Egge Mountains. 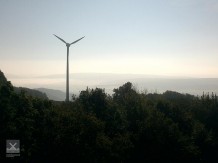