Wherever possible, this stage follows narrow green passages towards Hamburg city centre. The route passes the district of St. Georg which has undergone a great deal of change in recent years. As in many other areas of Hamburg, a ‘gentrification’ has taken place here as well: the former ‘problem area’ is now a ‘des res’, which is also reflected in significantly higher rents and a change in the character of the residents.

Shortly after the famous street Lange Reihe, we reach one of the city's landmarks, the Außenalster, the bigger of the two downtown lakes. The E1 now leads along the south bank for a while, along the Lombardsbrücke with a view of the smaller Binnenalster and a beautiful panorama across Hamburg.

Via the ramparts of the Wallanlagen, an elongated part of the Planten und Blomen park, we finally reach the world-famous St. Pauli district and the River Elbe. We now follow the Elbe downstream to the west, passing the Landungsbrücken, Hafenstraße and the Fischmarkt until we finally reach Altona. Until 1938, Altona was still an independent city and not part of Hamburg.

The 'Altonaer balcony' offers a great view of the Elbe and the southern harbour area with the Köhlbrand bridge. Benches and a café provide an ideal place to rest. As the path continues, there are always great views up and down the Elbe. In Övelgönne, the E1 runs just above the Elbe beach, a popular spot for city dwellers. In summer, there is a constant bustle and the smell of barbecues, and you can watch the big container ships entering and leaving the port.

Until the end of the stage, we are never too far away from the Elbe, hiking on chrming riverside paths. Passing the Teufelsbrück pier, we finally reach the exclusive district of Blankenese. The ferry brings us to the south bank of the river and to Cranz, the start of the next stage.

Anyone who is up to a few extra kilometres and has a tent can spend the night a little further down the Elbe at the Elbecamp - probably one of the most beautiful camping sites along the E1 in Germany.

Blankenese is the meeting point of the main route and the western variant of the E1. The E9, which accompanied the E1 from Lübeck to Blankenese, leaves the E1 here on its way to the North Sea coast.

The Altonaer Balkon - a square located on the Elbe slope - offers a good view of the Elbe, the Köhlbrand Bridge and the harbour area. 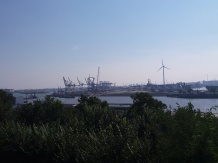